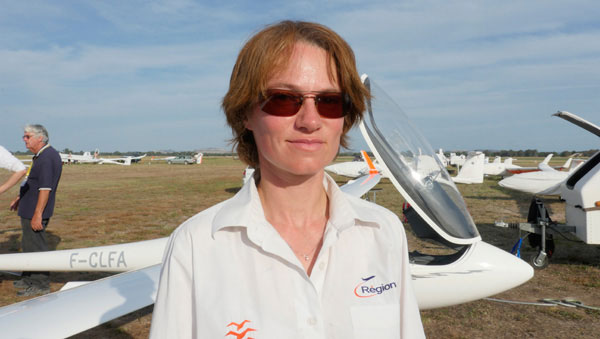 The 2017 Women’s World Gliding Championships will be held at Zbraslavice in Czech Republic 17 May - 4 June. Entries to the three classes of competition are now being received, including the current 15m Women’s World Champion Anne Ducarouge. For the first time, the Women’s WGC will include the 18m Class, and drop 15 Class from the championships. Anne is entered in 18m Class, so there will be a new 15m as well as the first ever 18m Women’s World Champion after this competition.

Anne has won the last two Women's WGCs in 15m Class, but since having her first child six years ago she has only been flying with the French team, much of the time at the Centre National de Vol à Voile, Saint Auban.

We met Anne at WGC Benalla in January when she was competing in 15m Class. She and Lisa Trotter talked over her preparation for the championships and the difficulties women glider pilots face. Lisa also asked what she particularly loves about gliding, Anne said, “The glider erases all differences between people, and men and women in particular. It allows me to compete against men on equal terms, which is difficult in other disciplines.

As Anne was the only woman to compete at WGC Benalla, Lisa also asked her why she thought that was. Anne said, “I think that around the world it is linked to the culture. The differences between men and women in particular the way that children are taken care of. In France we have many structures for child care, so that the roles of men and women can be similar.

“In my own personal experience, both my husband and I are working and we share equally looking after the children. I think this is a big part of the problem. For a woman, as soon as you have a child your life changes. if there are no structures, if the roles are not even in the couple there will be a difference in how much flying you can do. We do have young women competing in France, but as soon as their family life evolves, they fly less and less.

You can see the full interview at youtu.be/kdpsrFSXVrs

Anne’s IGC Ranking is No. 67
She has competed in five Women’s WGCs and two WGCs

She came 9th at WGC Benalla in 15M Class