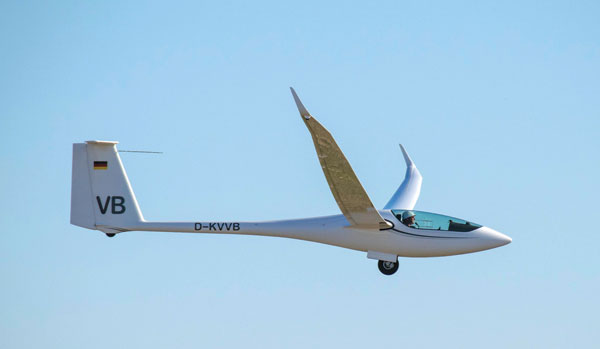 Oliver, nephew of Walter Binder who founded the company to make self launching gliders said, “We started ten years ago with the EB gliders. At that time the maximum weight for gliders was increased from 750 to 850kg, so we made a complete new Open Class 850kg self-launcher.”
The first EB29 was made in 2009, and since then Michael Sommer has won two WGCs in one of these gliders. At Benalla, Michael flew the latest variant, the EB29R. Lisa asked Oliver what was new in the 29R version.
“We made a new wing with a new profile, which is thinner, whereas the original EB29 has a modified wing from previous glider. We can now go to a higher wing loading. The original EB29 had a loading of 52, but the 29R can go to 57 kg/m2,” he said. 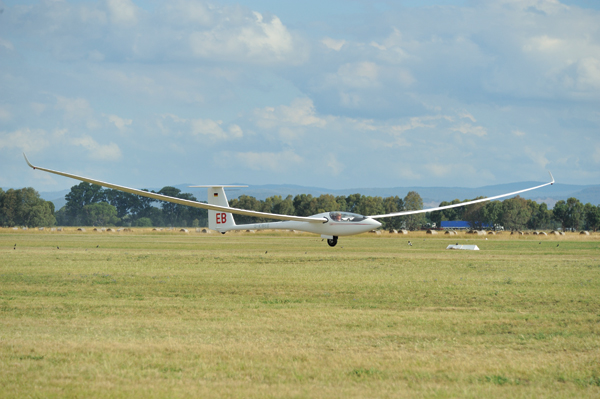 The EB29R also has a wingspan of 29.3m, compared to the JS1 with a wingspan of 21. Lisa asked about the advantages of this design. “Binder designs self launchers, which makes the gliders heavier. Having a bigger wing span increases the possibility for greater wing loading. Consequently, if the weather is very weak we can still climb full of water, while a glider with a 21m wingspan will have to dump water in order to climb,” Michael said.
He explained that the glider has a much greater range of conditions in which it can perform well, from fast to weak conditions. “I think the glider has advantages in any conditions because it is so variable. With the high aspect ratio, its performance at slow and medium speeds will be unbeatable.
“At Benalla you can have a mix of conditions. We have had some very good conditions in the practice week where we achieved speeds above 160kph. In the fast conditions we go very well because of the high wing loading. But looking at the sky today, if we do fly, it will certainly be a slow day where we fly medium speed, and with the high aspect ratio I am certain there is no glider that can beat it.”
Michael has been flying EB29s since they were first produced. He said, “To me, the story of Binder is extraordinary. Walter Binder started to build retractable engines for sailplanes, first for his own glider. Then later on, DG, Schempp-Hirth and other companies relied on Binder for self launching systems. Not being satisfied with existing gliders, he made the transition from making engines to making gliders as well. The business started by modifying existing gliders, taking the ASH 25 fuselage and putting a different wing on it.
“The company evolved with the ETA project, after which Walter decided to make his own airplane. He started with the two-seater EB28 which first flew in 2007, then progressed from the two-seater to the single seater EB29. The company employs only 12 people - six make the engines and six make the aeroplanes. They only manufacture three airplanes a year, so it really is a high-end workshop.” 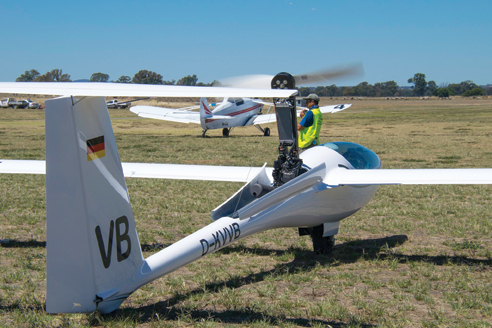 Team flying
Lisa asked him about flying at Benalla and his team flying with Tassilo Bode. “I could not wait to get back to my old home. I spent six years in Melbourne and was a member of GCV for four years,” he said.
“I think what Tassilo and I have developed flying together since 1999 is a success story. We fly pretty close together, so we have a bigger wingspan to cover the air, and we are less likely to miss thermals. We have two brains, to create the best possible task. It is risk management also. If you are on your own, it is more likely that you will make a mistake or miss a thermal. When there are two of you, you’re much less likely to lose points. I think it is a much safer and faster way to get around a course.
“We have a lot of history and trust, and don’t talk much in the air. It can’t simply be replicated by two people flying together – it’s a relationship built up over time.”

Passion
Asked what he loves about gliding, Michael answered, “Using the power of nature to achieve great height and speed is the first thing that fascinates me about gliding. I don’t need a competition for that. But the combination of that with racing, to try to beat the competition just using the power of nature, is exciting. I think it is a fantastic sport. Everybody is thrilled about the race and can’t wait to get going, to see everyone giving their maximum.” 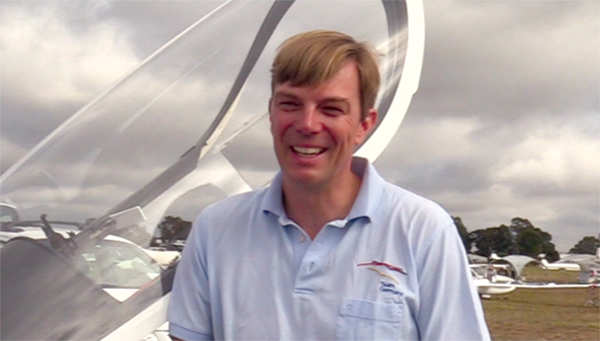 IN THE AIR
Michael Sommer won two days in the EB29R, but was beaten into 2nd place overall by Russell Cheetham in a JS1c. Sebastian Eder from Austria finished in 8th place in an EB39. Tassilo Bode finished 17th in an EB29R and Pierre de Broqueville from Belgium 18th in an EB29. Italian Alberto Sironi finished 10th in a Quintus, but the JS1 is still the dominant glider in Open Class, winning seven of the top ten places. Out of the 35 open class contestants, 23 flew JS1s.