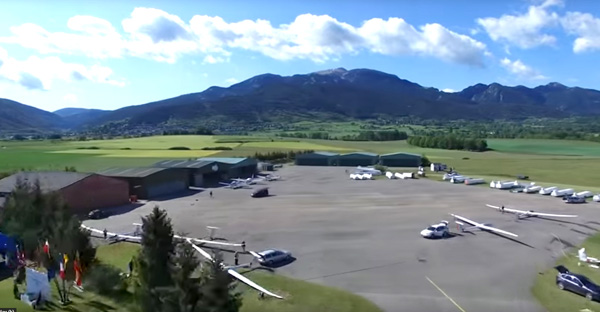 The airfield on the morning of 6 June

After a rest day due to forecast thunder showers in the Cerdanya valley, the 19 competitors gathered at briefing to see what the weather had in store for Race Day 4.

A low pressure system still dominated the region bringing moist southwesterly wind off the Balearic Sea. Cloud bases were expected to be lower than they had been earlier in the week with thermal tops at 2,800m, making it difficult to task into the high mountains. The moist air threatened to cause spread out, over-development and rain later in the day in the valley. It was noticeably colder on the ground. A 224km zig-zag five-point task was set. 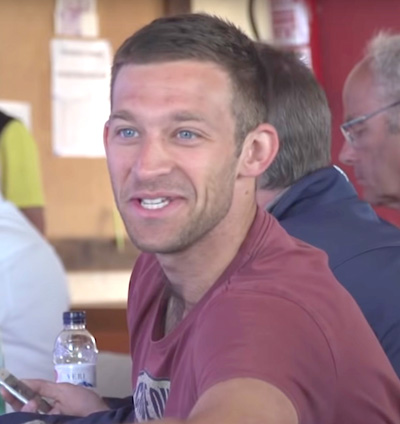 For the first time, the initial turnpoint after the start was to the west instead of the east to avoid the moist air coming from the sea.

The start line on 6 June

From the airfield, broken clouds were visible indicating a pulsating or bubble day which will make the thermals short lived and confused. However, it promised to be a good ridge soaring day.

Today the start was into wind with the first leg to Cometa 67km in the west side of the Sort Valley. Mike Young was the first across the line, quickly followed by Jon Gatfield and Pete Temple. The start was slower than the previous day and more spread out and many gliders started quite low.

The field quickly split into two distinct groups. Mike, Jon and Giles Navas went north to the ridges, but the main group opted to climb in thermals in on the south side of La Cerdanya valley.

The southern group, which included Sebastian,Tilo, Christoph Limpert and others ran down the valley quickly with good cumulus under Cadi Mountain. They arrived at the first turnpoint ahead of the northern group.

The gaggle stopped to climb before crossing the valley but Sebastian and Tilo cut short their climb and pushed out ahead. Tilo made the turn first at 2,300m followed by Sebastian and the main group not far behind.

They set off to the southern turnpoint of Boumort. That turnpoint is quite high and a good altitude was needed to make it. Christoph Limbers, followed by Giles, Mike and Pete had the altitude to head straight into the TP.

After Boumort, Tilo and Sebastian separated on the northern leg to Maniga. Tilo tracked further north. They both needed climbs to get to the TP and Sebastian found a very good climb to 3,000m, putting him above and in the lead.

It seemed that Tilo's strategy was simply to push ahead, which may have forced Sebastian to follow him or loose touch.

This was a critical part of the race as Tilo was never able to pull back his height differential and Sebastian always had a height energy advantage over him.

This strategy was not without risk. But Brian recounted that Tilo had flown the national Spanish Grand Prix here, which he won. He was also at La Cerdanya when he was 18 years old and has experience with ridge running at low level in this area.

The telescope team are bringing images of the weather in the mountains during the race each day. This  picture shows the clouds in the Cadi Mountains as the fleet are racing through.

Quite possibly, the weather could have deteriorated by this time in the race but fortunately, conditions held and looked good for the remainder of the race.

Gintas and Sebastian arrived at Maniga a few kilometres ahead of Tilo. The next leg was only 8km and they took the ridge to the turnpoint. Sebastian and Gintas kept their 3km distance lead over Tilo as they rounded the point and headed 23km south to les Piques. Tilo went a little bit east and Sebastian joined him, so Tilo had caught up, but Sebastian maintained his 50-100m height advantage.

The three pilots took the fifth turnpoint together and had just about enough altitude final glide, but would need the energy on the ridges to get to the finish. The final turnpoint was Puigcerda 62km east.

This leg turned into a battle between two champion pilots and what are now clearly the top two gliders in production, the JS3 and Ventus 3. Tilo was always just slightly lower than Sebastian, which meant that he had to fly lower on the ridges causing him to fly that bit more distance than Sebastian, who was able to take a more direct line to the turnpoint.

At this point they needed 800m to get home. But Sebastian had a good 100m more altitude above Tilo.

Meanwhile, Gintas deviated north and gained a lot of altitude and pressed forward at over 200kph. But since they were still only 800m above the airfield, it could all be decided by the last climb that they both had to take or find in the buoyant air along the way.

As the leaders came onto the control point, Sebastian kept his 100 to 200m attitude advantage, making it almost possible for Tilo to catch him as Sebastian used his energy advantage to pull further ahead.

As they reached the finish line, both pilots were only just above the minimum required altitude of 1,300m. They had to slow right down and squeeze over the line to avoid incurring any penalty points.

Gintas finished next, closely followed by Louis. Behind them Max Seis was in front of Pete Temple at the control point but Pete had a bit more altitude which he used to overhaul Max and finish in fifth place. 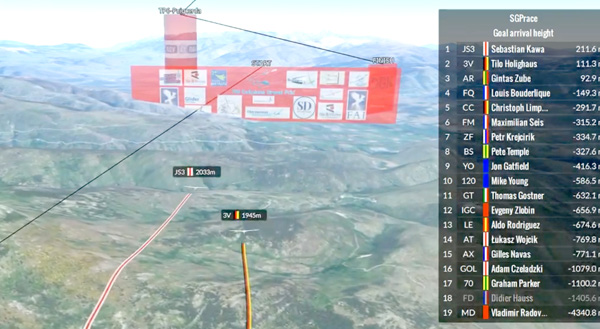 Sebastian and Tilo edge to the finish line with a marginal final glide to keep them above the minimum finish height of 1,300m.

With two race days left to fly, Tilo Holighaus is in the lead with 31 points followed by Sebastian Kawa with 25 points and Louis Bouderlique in third position on 19 points. If the top three pilots can keep within the top top five scoring places for the remaining races, they should all at least be on the podium at the closing ceremony. But as these intensely competitive pilots will not be going for anything but top position, the final races promise to be exciting. 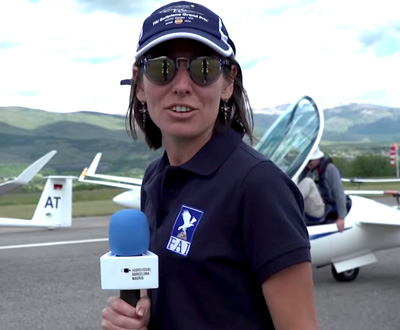 Claire Heliot from the media team has been interviewing pilots each day.