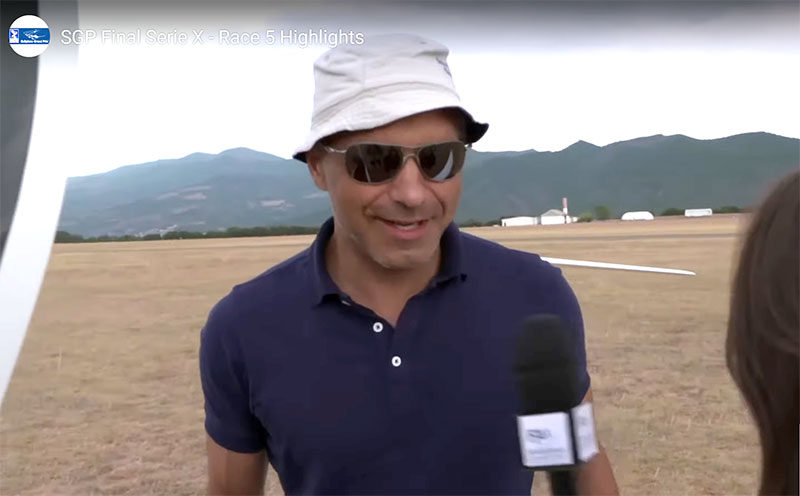 On a difficult overcast day, Sebastian Kawa once again displayed his mastery of the sky and won Race 5 at St Auban.

A cold front approached St Auban with a large mass of cloud covering the area. At briefing, meteorologist Aude Untersee said with a smile that the rain should stay in the east and west of the contest area. She made no mention of the north and south.

Using the weather forecast technique of looking out the window, it was obvious that the day was going to be weak and overcast with, hopefully, some embedded cumulus forming. The wind was light, negating the normal ridge and mountain thermal or dynamic effects associated with soaring conditions in the Southern Alps.

A task up and down the Durance Valley with a distance of 254.11km was set. 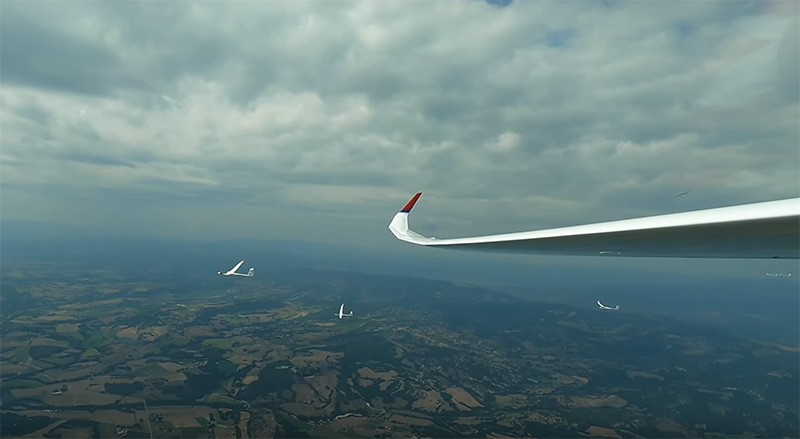 The competitors head off into the 'Tarte Concombre' sky.

Due to adverse weahter conditions, sadly Race 6 has been cancelled.

Uli Schwenk led the way across the starting line to the first turnpoint of Beaumont de Pertuis, just 35km south of St Auban.

The fleet inched their way forward, taking any thermal they found. A split between the pilots emerged early, but no real advantage was found before the second turnpoint of Sainte Croix Aero near the shore of Lac St Croix.

Uli Schwenk led the way into the turnpoint and found a thermal on the low escarpment on the shore of the lake. The main pack of gliders followed him. As they climbed above 1,500m, suddenly conditions looked more interesting.

However, soon the French pilots split to the east and the main gaggle kept together to the west. The sky was grey and described by Benjamin Neglais during his live commentary as ‘Tarte Concombre - cucumber pie, filled with mush with few or no opportunities to climb'. 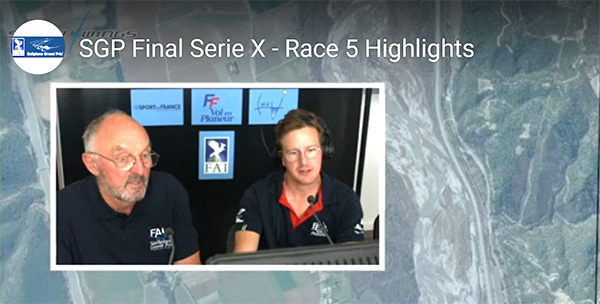 Brian Spreckley and Benjamin Neglais provided live commentary and analysis during the races.

Nevertheless, soon the western group found reasonable climbs in embedded cumulus to over 2,500m. But the French pilots to the east struggled below 1,500m.

Rene Vidal, who was on the western side radioed – actually, he used his mobile phone – that the sky en route looked good.

Despite this, pilots were moving along slowly. But the leading group with Sebastian Kawa, Mario Keissling and Uli Schwenk were now above 2,600m and flying above 200 kph. These pilots made the correct decision to stick to the west as they made their way to the Sisteron Citadelle.

Two French pilots, Sylvian Gerbraud and Max Seis, kept with main group as they made their way into the Sisteron turnpoint. Kawa lead the way out of Sisteron at over 2,700m. 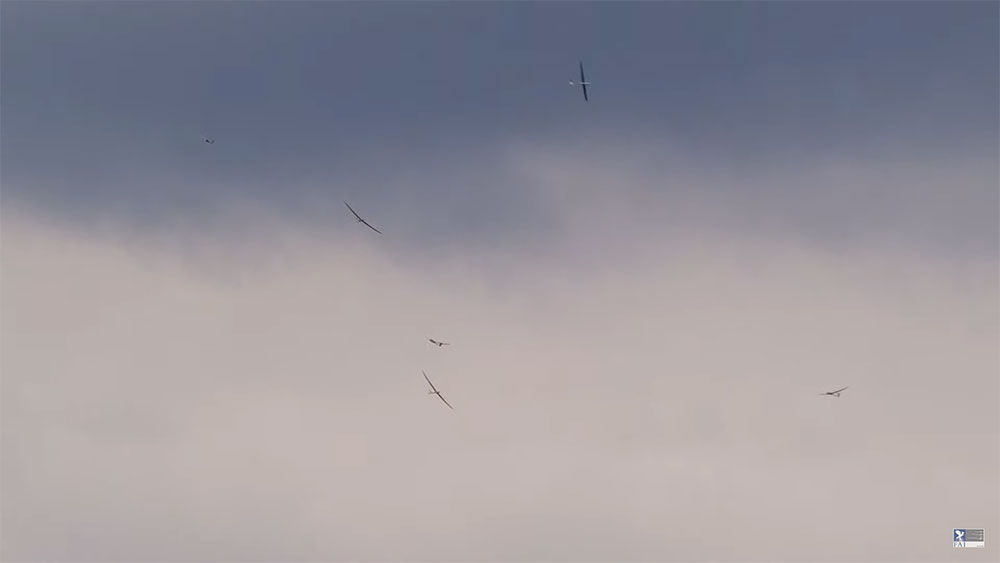 Just a few minutes later, the field were down to 1,500m and the race was completely changed once more. Mario, Tilo and Marius were higher but they were flying at best glide and they were running short of options. They were looking for sunny patches and at this point several gliders were looking at outlanding – either with or without engines.

Sebastian remained at the top at over 1,300m, but the pack was drifting lower and lower and no one found any climb. Philippe de Péchy eventually marked a thermal. Sebastian joined the climb that de Péchy had found, and the gaggle joined them and the race began again. Sebastian left at 1,500m and the lower pilots, including Mario, struggled to get the climb above 1,000m.

The next turnpoint was Montfort with 80km to complete the task.

Four pilots including Sebastian were in the lead. The main group had nothing to lose by waiting to climb because there were still points to be gained for the six pilots following the leaders, and nothing to be gained by landing out.

The group struggled to 2,000m and, once more, the race began again. The uniform grey sky began to break up and the slight wind increased, giving hope that the race might be completed after all.

Sebastian led the way into the Saint Jurs turnpoint, followed by Mario and Uli. 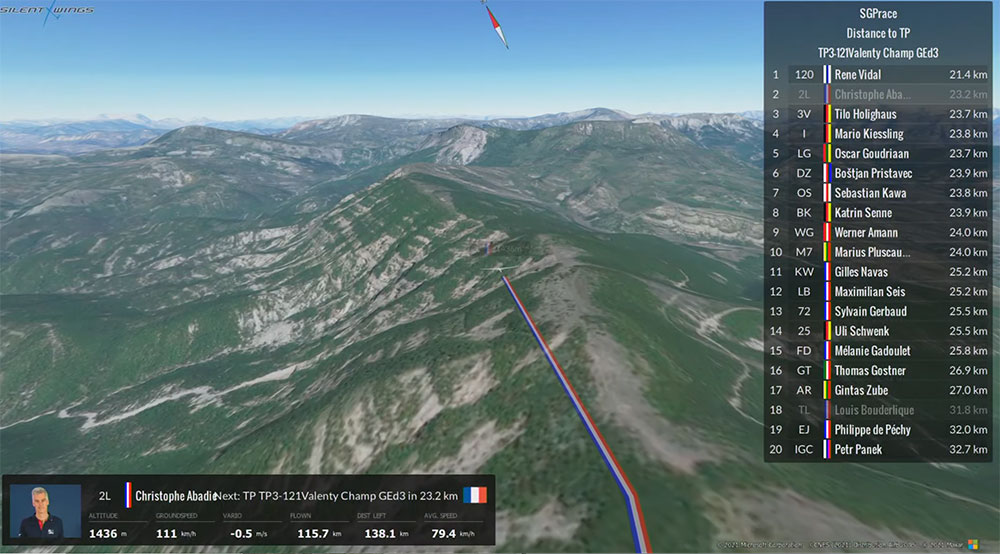 They now had to head back to Sisteron Citadelle 39km away and then to the final reporting point before crossing the finish line. Sebastian was higher but Mario, who was lower, pushed faster although he was unable to improve his position.

Mario finished in second position after a close final glide behind Sebastian. Tilo raced forward to close the distance between him and Mario but had to be satisfied with third position.

This morning it was hard to see that the day would provide such an interesting race with such an exciting finish.

Don’t miss the action tomorrow. In particular, don’t miss the final day on Saturday when the weather promises to bring an exciting finish to the SGP Finals at St Auban.