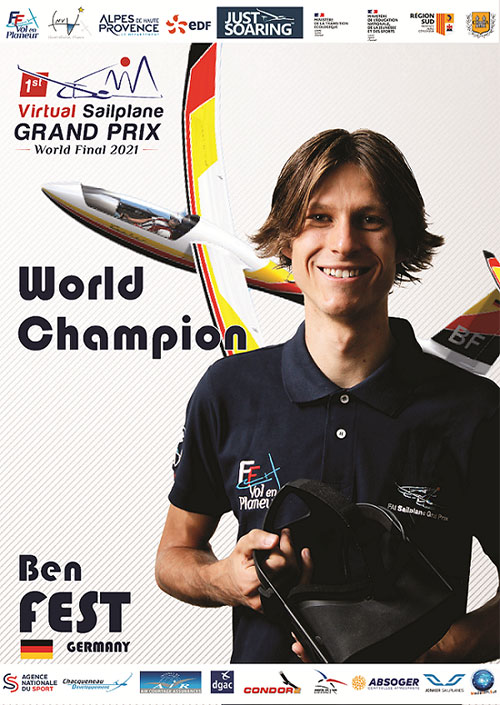 The 1st Virtual Sailplane Grand Prix - World Final 2021 brought together twenty pilots from twenty countries, who competed over a week of competition, every evening from 8pm French time. On the programme: 7 races of less than 2.5 hours in the French Southern Alps, to crown the first eSport World Champion in the history of world aeronautics.

The FFVP (Fédération Française de Vol en Planeur) launched the eSport movement from the first lockdown, in March 2020, well aware that its licensees needed to fly virtually, to maintain their skills. The french association, supported by its volunteers, therefore started to invest in eSport by creating "Masterclasses" - lessons supervised by recognised pilots open to all - then by organising two eSeries competitions in December 2020 and March 2021. These experiences have allowed us to test the most appropriate formula to promote our sport and to offer an attractive competition to pilots. The Grand Prix formula was therefore chosen to create this event, in collaboration with the FAI and the FAI Sailplane Grand Prix teams.

This virtual competition had several objectives: 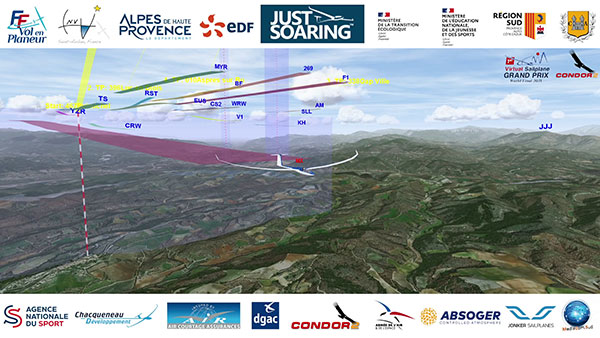 The regatta start was intense, with 20 gliders crossing the line.

There were 2 parallel competitions: an official competition with 20 pilots, and an OPEN competition, to develop eSport in the world, with 390 pilots. This very first eSport event saw 410 pilots registered. This is undoubtedly an incredible number that will grow over the next editions and open up new possibilities for aviation sports, such as gliding, to gain greater public understanding, and to train new pilots worldwide.

The aim of the OPEN event was to allow everyone to participate in the races, with simpler rules, and to be able to create a virtual pilot ranking list in the years to come. The OPEN pilotes were racing in the same races as the official pilots of this 1st Virtual SGP.

For the official competition, every evening at 18:00UTC, 20 pilots from 20 different countries competed using Condor 2 Soaring Simulator on the same tasks flown in the afternoon by the real gliders during the 10th FAI SGP Final in St Auban. The competition was conducted according to the FAI Sailplane Grand Prix rules.

6 out of 7 races were based on real races. An extra race  took place when the real pilots could not fly due to weather in St Auban, allowing the virtual pilots to put on a great show for the public that day, while flying in the Ecrins mountains: https://youtu.be/JgUiM0dEnDI?t=7417

The eSport project and competition was led by Antoine Havet and his team of 20 volunteers. The pilots competed in an excellent spirit and did not file any protests. They helped the organisation throughout the event to create an attractive live stream for the public.

The public was able to experience the eSport races via Condor 2, and a major effort was made to cover the races live on Youtube, Facebook and Twitch. The races were available worldwide and also broadcast on esport.sgp.aero. They were commented in French (by Maxence Stawski and Emmanuel Quartier) and in English (by Mark Travner, Antoine Havet and Matthew Scutter). The video control was managed by Timothée Barusseau and Jean-David Thoby based remotely (North of France), while the race direction (Antoine Havet and Jean-François Gombault) managed the event from the St-Auban-CNVV airfield, in order to be able to make the direct link between the real and virtual races.

The competition was supported by many personalities, including the 10th Sailplane Grand Prix World Champion Sebastian Kawa. Mario Kiessling (2nd), Maximilien Seis (3rd), Tilo Holighaus (CEO of Schempp-Hirth and 10th SGPF pilot), Brian Spreckley, Benjamin Néglais and other pilots joined the live broadcasts every evening, to talk to the public watching the races, in order to promote the eSport competitions

You can watch the races again here: https://youtube.com/faisailplanegp 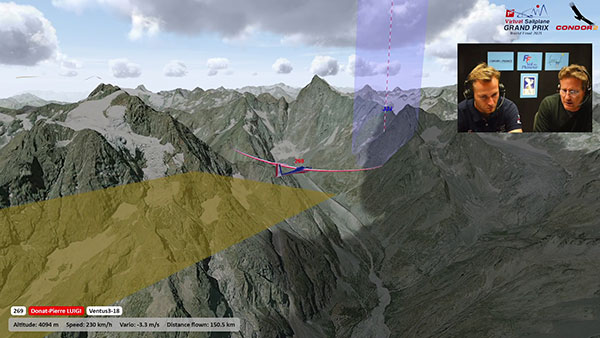 For this virtual contest, the sponsors gave us the opportunity to reward the drivers according to their ranking:

JustSoaring, an American start-up, offered a complete simulator set-up worth $2,000 USD! This is a huge reward for the winner, who was also offered by the FFVP a discovery flight, in St Auban, with a pilot from the French team!

The Condor team also offered dematerialised gliders for the Top 10 of the Official and OPEN competitions: about 40 in total.

We would like to thank them warmly, it is also thanks to them that the eSport project can progress.

The future of eSports

The next version of the simulator, Condor 3, was announced by the game designers during an interview during one of the races! No release date has been given, but enthusiasts should be able to enjoy an incredible weather improvement in a few months (arrival of rain, thunderstorms... and choice of weather by zones): a big step to make the races more realistic, the simulator's weather being judged a little too homogeneous for the moment.

The FAI Sailplane Grand Prix and the FFVP are pushing for the recognition of eSport by the community and the public. The objective is to develop gliding worldwide, to train new pilots, and to create a large community around Condor and the Grand Prix races.

To achieve this, it is planned to create virtual races every day, in Grand Prix format, from 2022. There will also be 9 qualifying races... to qualify for the second edition of the Virtual Sailplane Grand Prix.

The 2nd Virtual SGP should take place in 2023, at the same time as the 11th real SGP World Final, the aim being to link the two events and keep this relationship between the real and the virtual.

The Virtual SGP took place on the evening of each event of the 10th World Grand Prix Final, at the same place as the Real Grand Prix, i.e. at the start of Saint Auban, on the Arc Alpin stage, created by a team of French and foreign volunteers on Condor 2. This is currently the most used stage on the simulator, as it extends from the south of France to Austria, covering more than 530,000 km².

There was a desire to have the virtual pilots fly on the same circuits as the real pilots, while adapting the weather, in order to be able to compare the pilots' choices on each circuit. These events were therefore adapted to the virtual format thanks to French experts, on Condor 2: Marc Till, Michel Bernard, and Jean-François Gombault.

Among 6 possibilities, the pilots chose only 3: the Ventus 3, the JS1 and the JS3, all flying in their 18m version, of course... and with a wing load limitation of 48kg/m² as in the real SGP. The Italian Thomas Truffo delivered exceptional paintings for the event: each glider had a livery representing its country, allowing the public to easily recognise the glider and the pilot presented on the screen.