Tilo pulls away from Kawa and rest of field 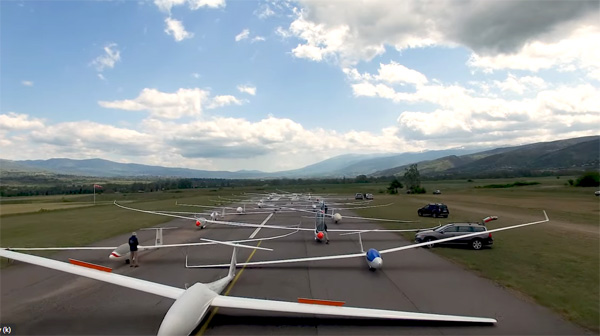 The low pressure system was turning into a summer storm and heading north. For Cerdanya at altitude, this meant wind. Above 3,000m the winds increased to 60–80kts at 5,000m. This brought the probability of severe turbulence, rotor and wave above 3,000m. Otherwise, conditions were good with cumulus along the mountain tops. 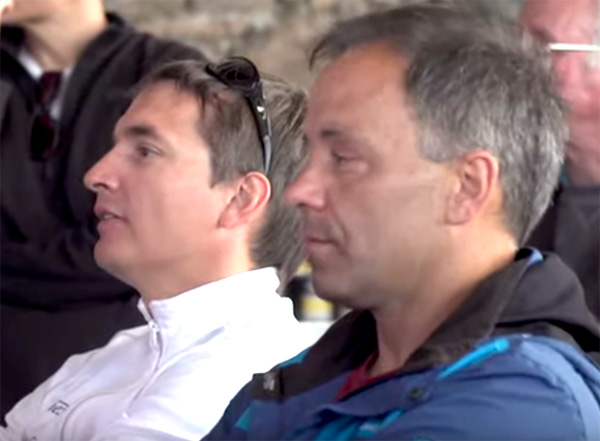 Before the start, the wind was even stronger than anticipated so the tack was changed to a 220km task east of Cerdanya Valley, then west and into the Sort Valley. The wind was strong at 30-40kts at altitude with a low cloud base. 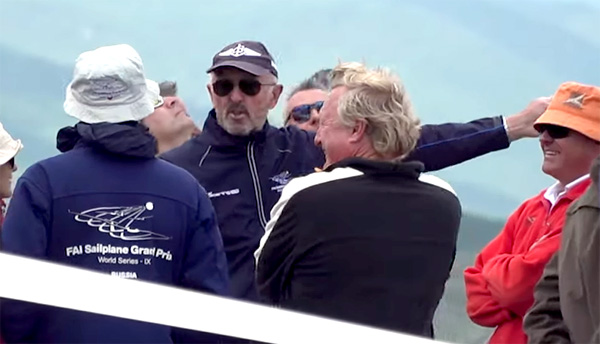 CD Brian Spreckley and the competitors weighing up whether or not to delay the launch in the hope that the wind would abate.

The fleet ran up to the start with a 20kt tailwind. Jon Gatfield turned straight for the ridges on the north, and everybody else took a climb back up to altitude. Giles Navas followed Jon onto the ranges. Jon kept ahead and the main group with Tilo in the lead came into the first turnpoint together.

On the second leg heading into wind, Jon and Giles kept pushing ahead while the others climbed above 2,900m on the Carlit to make the crossing to Caravassa Mountain. Tilo and Sebastian soon found each other and flew together, keeping altitude and flying conservatively. They took a climb on La Ravassa Mountain.

Tilo left the climb first and went into the turnpoint while the rest of the group with Sebastian stopped to climb on top of the mountain.

Tilo left without climbing and pushed on ahead to the next turnpoint followed by Christoph Limpert. They nearly caught up with Jon Gatfield who had now climbed up on Pic de l'Orri.

Christian was now ahead of the gaggle and went straight for the turnpoint. But Tilo had already turned and was heading out. He found a very good climb to 2,900m while Sebastian was still at 2,500m and behind him. This was a major deciding factor. On this leg heading back east there was a 20kt tailwind and whoever was highest and in front had a great advantage.

On the leg east he maintained his lead on Sebastian and the others. Meanwhile, Jon was still far ahead of Tilo taking a good climb on the north side of the La Cerdanya.

Tilo climbed to 3,000m and had final glide. From that point he was always 5 to 6km ahead of Sebastian with several hundred meters in altitude to spare.

Tilo caught Jon at La Liagonne turnpoint and once again flew past Sebastian on his way out.

Tilo cruised to the finish line followed by Jon while Sebastian chased him hard but was beaten into third across the line. However, because Jon had missed one of the turnpoints, Sebastian was awarded second place, gaining 8 points while Tilo took 10 points. 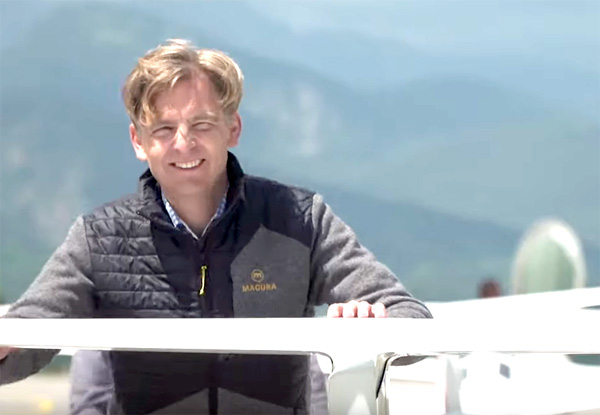 Tilo Holighaus wins the day to take a commanding lead in the championships.

With one more race to go, Tilo remains top of the field with 41 points, and Sebastian on 33 points. The winner of the final race receives an extra point (11 instead of 10) So if Sebastian wins the final race, that will put him on 44 points. Tilo would only have to come in 5th to win 5 points and beat Sebastian by one point.

The next group to cross the line was led by Didier Hauss, followed by Christoph Limpert in fourth place. There was a close race to the finish by Petr Krejcirik, Maximilian Seis and Louis Bouderlique. Coming up to the finish line, Peter passed Louis and pipped Max on the line by less than a fuselage length to take 5th place and 5 points.

After landing Tilo said, ‘It was a great race. I was out ahead of everybody and climbed to 3,000m. Then I saw Jon Gatfield out ahead of me but I was sure I could overtake him. I am very happy.’

Jon lamented missing the turnpoint at Sort by 0.2 km. He said, ‘It was great flight. I am very happy with how I flew, but no points.’

Jon Gatfield missed the Sort turnpoint by a tiny margin.

Didier Hauss is now in third place on 23 points. So, if he wins the final race, it will put him one point more than  Sebastian who would only have to gain two more points to take second position. Louis Bouderlique has 22 points followed by three pilots with 16 points.

If Tilo uncharacteristically decides to play it safe and aim for fourth or fifth place, while Sebastian has to go for first place, the third position on the podium  is still very much in play. 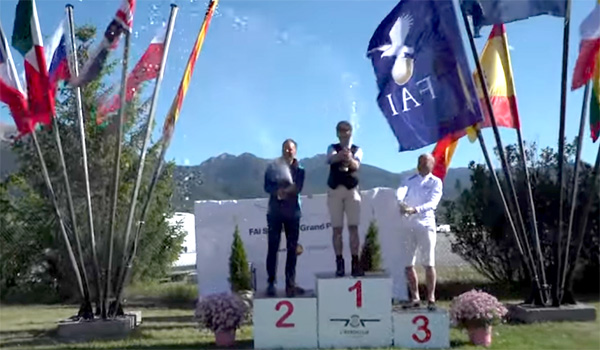 Tilo Holighaus, Sebastian Kawa and Didier Hauss on the podium.