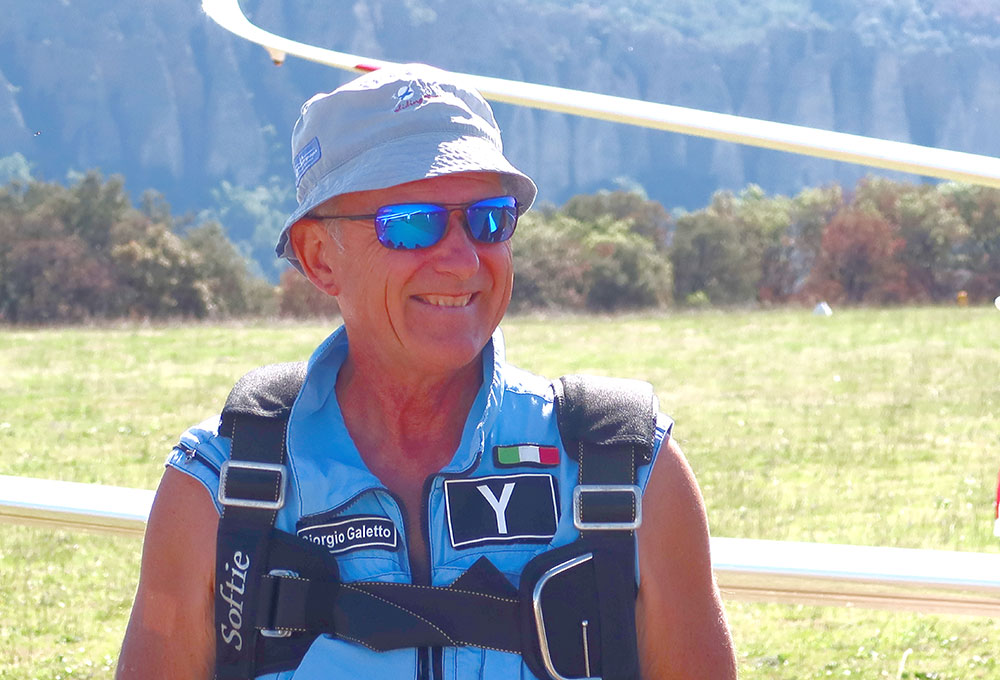 On the first two days of e4glide, the weather provided good soaring conditions. Matthew Scutter, the winner of the two previous eGlide competitions came 1st on Day 1. It was a good start to defend his title. Giorgio Galetto took 2nd place about six minutes behind him.

The scoring for eGlide is based on elapsed time. As the winner, Matthew had a score of zero for the day. The following pilots are scored on the elapsed time after the 1st glider finishes, as each pilot crosses the line. Georgio Galetto came 2nd 5.88 minutes after Mathew followed by Tilo Holighaus 8.35 minutes after Matthew.

However, Tilo Holighaus won the 2nd race and Matthew had a bad day. He became stuck trying to climb away from Pic de Bure and ended the day in 5th place, but over 26 minutes behind the leader.

Giorgio once again finished about 5 minutes behind Tilo, the day winner, but he finished 21 minutes ahead of Matthew, putting him at the top of the scoreboard.

The next day a large low pressure system bore down on southern France and a short 168 km task was set. However, none of the fleet were able to complete the task and all either landed back at Saint Auban after abandoning the task or landed out at airfields to the north. The following day there was no task and the low crossed the area bringing rain.

Matthew Scutter on tow in a LS8e Neo FES

The following day a task was set with a long southern leg, but the weather conditions turned out to be too uncertain in the south and B course was flying a 250km route from Saint Auban, Prunieres, Beynes, Digne les Bains, Orpierre and home.

The weather was light northwest winds and cumulus over the mountains to 2,500m. When the course was set the forecast winds were more northerly which would have made many of the east west ridges work, but the wind turned out to be more westerly which made the conditions in the Durance valley and the ridges to the west much more difficult.

On the first leg the fleet tracked towards Morgon, which is just across the Lac de Ser Poncon from the first turnpoint. The leading group of Giorgio, Benjamin Néglais, Jernej Lokovsek in a Duo Discus and Matthew climbed well there. But Tilo went to the northern side of the lake directly to the turnpint. This looked like a bad decision, but in the end the leading group started the second leg more or less together.

The handicap system was interesting to watch in action. Tilo and Matthew flying lower performance gliders reached the turnpoint 3.7 km from the centre and turned as soon as they clipped the line. The Ventus 3s however had a 500m circle and had to fly further before turning. This worked very well on all the turnpoints, and at the end of the day it did seem to even out the field in the final glide very well. 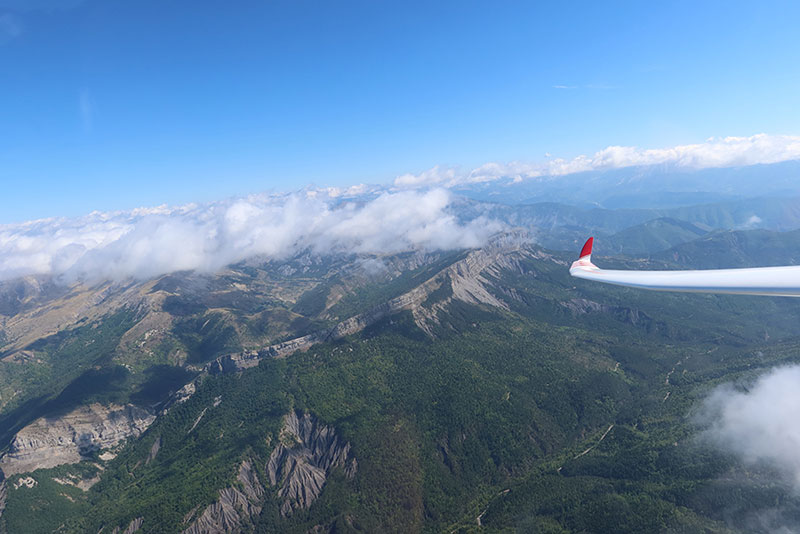 Flying in wave with a Mistral wind.

The second leg was the first traverse of the wide Durance valley. The lead gliders gradually lost their altitude and were soon down to below 1,500m. They turned for Digne turnpoint to the south and had to cross the Durance Valley again.

By this time the sky was nicely filled with scattered cumulus to over 2,000m and they quickly made their was to la Bigue mountain near the centre of the turnpoint aided by a tailwind.

None of the leading group stopped to climb on la Bigue, following the axiom – when going round a turnpoint with a tail wind, turn as low as you dare, when turning an into wind turnpoint, turn as high as you can.

For the third time they had to cross the Durance. With the westerly wind blowing, they had difficulty finding climbs on the ridges and all reached the Chabre well below its ridge line at 1,400m. In fact, several gliders were below 1,000m. Tilo was below 700m and was now out of contention.

The fleet had stretched out, putting the leading group more than 30km ahead of the gliders at the back. 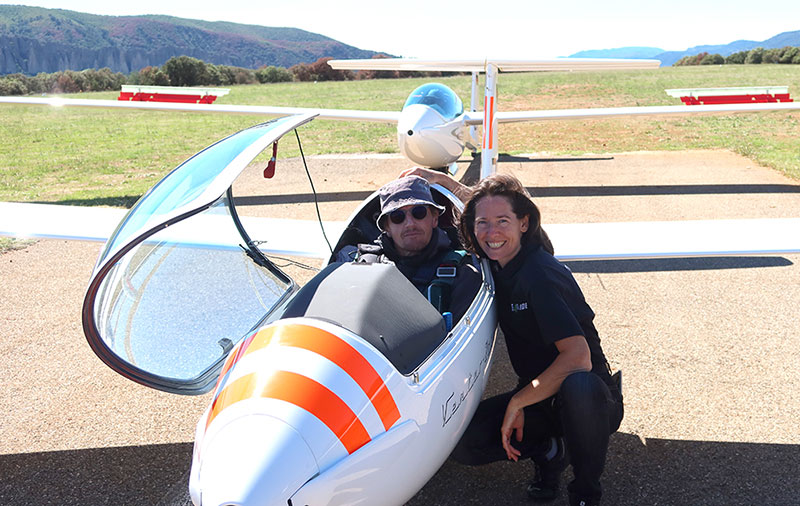 Benjamin Néglais ready to launch on the final day with Claire Heliot.

Benjamin seemed to have a reasonable run along Chabre to the turnpoint followed by Matthew and Jernej in the Duo. As they rounded the turnpoint they had two choices. The main group tracked straight back across the Durance for the final time towards Sisteron. Giorgio made the wise decision to cross from Chabre to la Plante, a curved ridge facing more west. Sure enough, this ridge worked well and Giorgio was soon back above 1,500m and tracked quickly towards Sisteron and home. This brought him to the front of the fleet. Only Jernej was ahead of him.

Meanwhile Matthew and Benjamin struggled to find climbs in the valley or on the mountains on the easten side of the valley. Eventually, with use of their engines, they all found enough altitude to make their way to Sisteron and final glide.

Jernej stormed ahead of the fleet taking first place. Behind, Matthew was gradually overtaken by Giorgio who clipped him on the line. However Matthew had used more power than his allocated 2,000 watt hrs to get to the line and suffered a 243 second penalty.

The final result was Jernej Lokovsek 1st, Giorgio in 2nd position and Matthew 3rd. This result helped Matthew move up three positions to 2nd overall, but Giorgio remained firmly in the number one spot 19 minutes ahead of Matthew. Luka Znidarsic, the developer of the FES on which eGlide competitions are based, was in 3rd position just one minute behind Matthew. 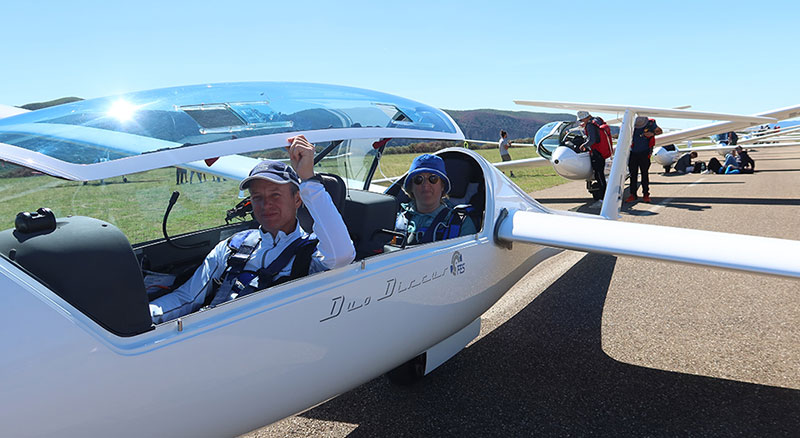 The northerly Mistral wind dominated the final two days of the contest. The Mistral is a cold, northwesterly wind and brings clear skies as a venturi effect funnels the wind between the Alps to the east and the hills on the other side of the Rhone valley to the west. The wind blows along the Durance valley and changes the gliding conditions with good ridge soaring on the north and northwest slopes and wave.

The second last race was a push north into the wind and a dash south with a tailwind. The wind turned out to be more westerly than northerly so the north facing ridges did not work as forecast and made the task tricky.

Matthew Scutter won the day closely followed by Tilo and Benjamin. Giorgio came in 4th place less than four minutes behind Matthew. This left Matthew 15 minutes to catch up on Giorgio on the final day if he was to retain his championship crown.

Developer of the FES Luka Znidarsic waiting to launch in his Ventus 3F 18m FES.

The final race was in classic Mistral conditions with a moderate to strong northerly wind and crystal clear blue skies. The task headed north then back south and then crossed from west to east into the mountains before returning west and back to St Auban. This course maximised the possibilities for ridge soaring along the northern slopes including the long stretch of the Lure north of the airfield.

There was wave throughout the area but was of limited use to the contestants. It would have taken too much time for a pilot to climb in wave while the rest of the fleet zipped along the mountain ridges below.

Luka Znidarsic came 1st over the line, closely followed by Matthew and Benjamin.

Giorgio came in 6th place less that 3 minutes behind Luka, securing his position at the top of the table to become e4Glide champion. Matthew Scutter took 2nd place overall with Benjamin Néglais 3rd. 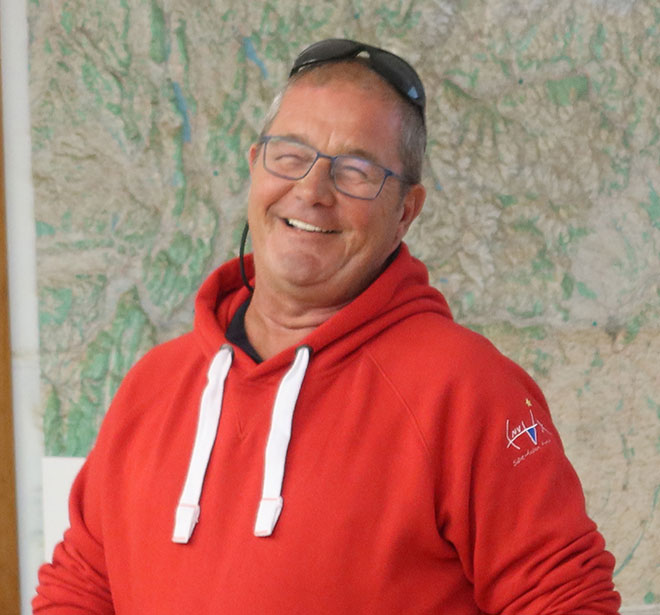 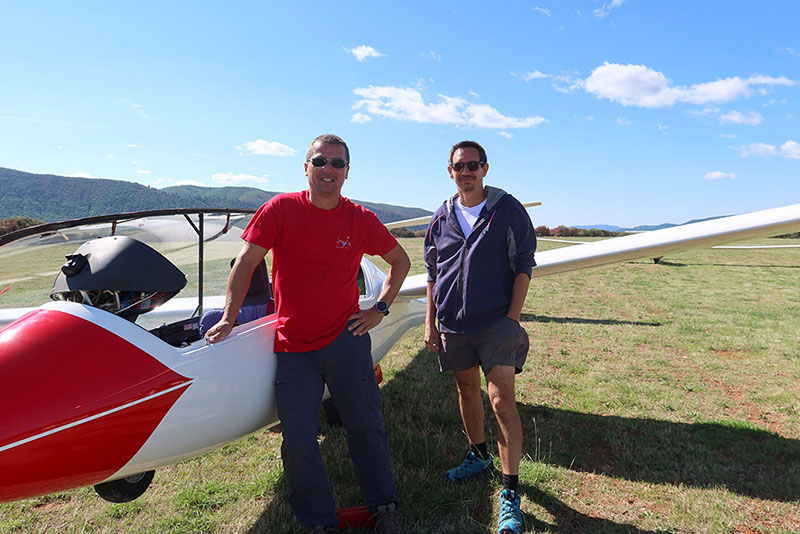 Once again, St Auban demonstrated what a great gliding site it is. The Contest Director was Roger Eyier who also served as the weatherman and task setter. The whole team at the CNVV put on a very well run and friendly event. All the races were broadcast with live tracking and commentary organised by Sebastian Chaumontet. CNVV instructor Manu Fournier gave live commentary during the races aided by myself. You can watch the videos at 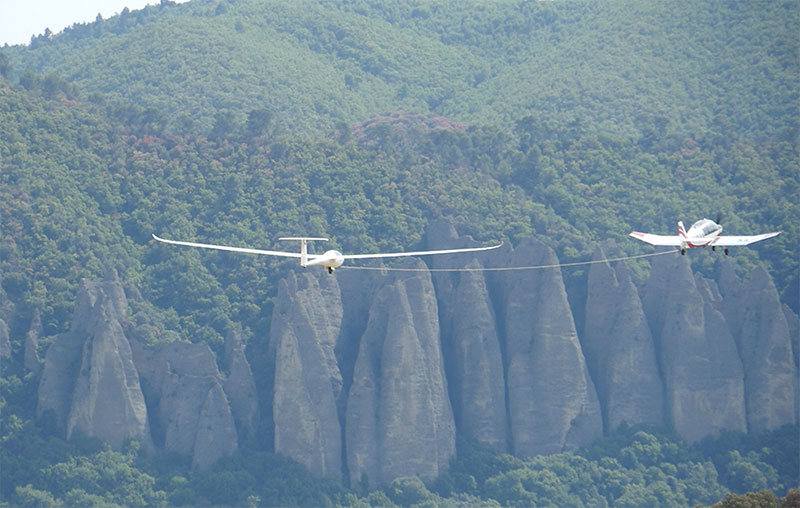 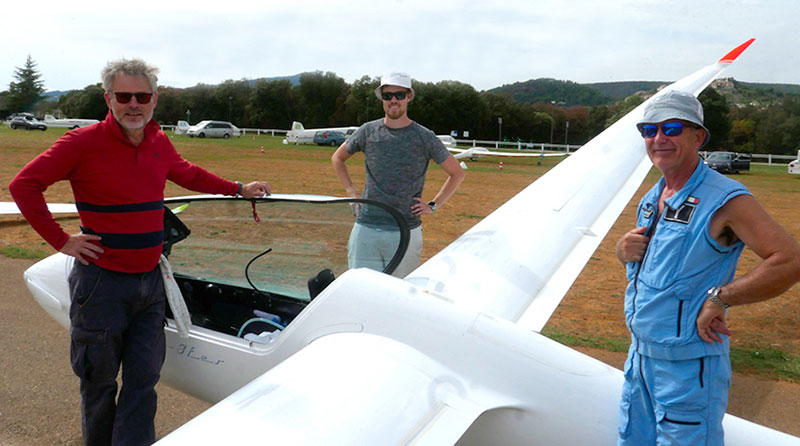 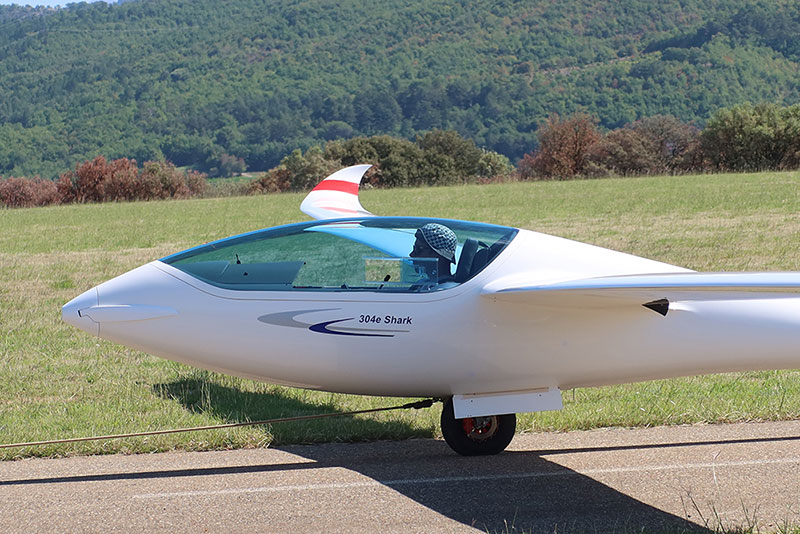 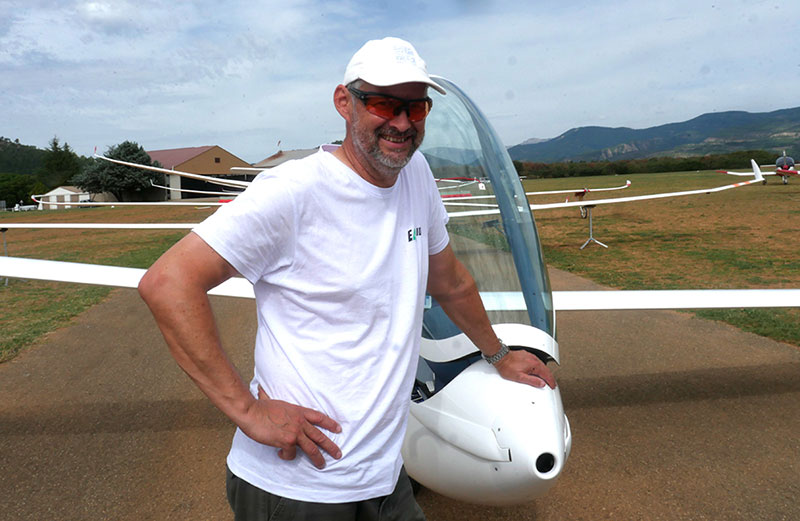 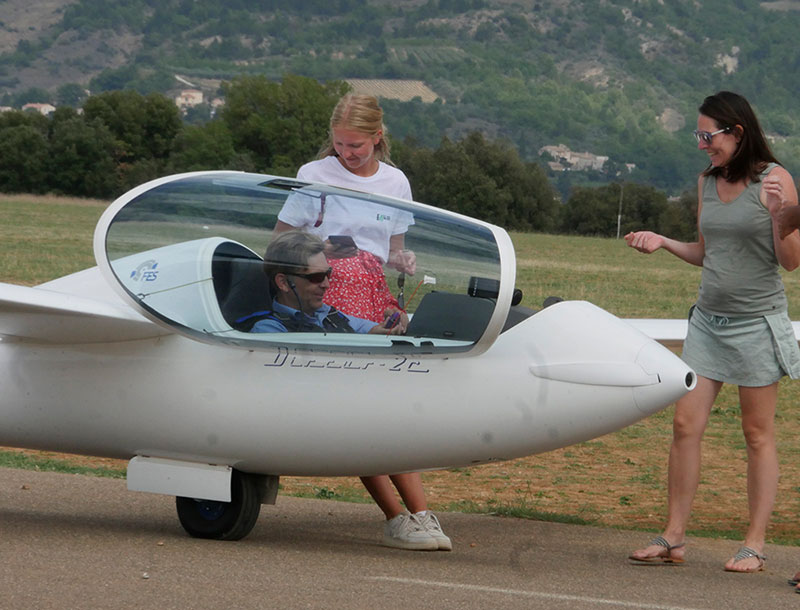