RAPTURED JS3 TAKES TO THE SKY 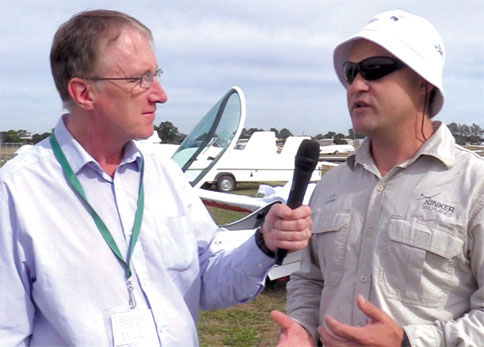 Magnificent people  in their flying machines
Thirty years have passed since a WGC has been held in Australia, and I wanted to capture some of WGC2017 Benalla for posterity. Numerous present and past World Gliding Champions were participating at Benalla, some flying in the competition and others serving as team captains, coaches and observers. Between them all, they have hundreds of thousands of hours of gliding, gained over at least six decades.

NEW GLIDERS
In addition to the pilots, there were several models of gliders at Benalla that had never been seen in Australia before. These included the Ventus 3, which had not flown in any competitions before, and the JS3, which had only made its maiden flight a few weeks before the championships, as well as the EB29R and the Diana 2. Not only were the gliders there, but their manufacturers attended as well.

JS3
The South African team arrived in Benalla with two brand new JS3s that were to be flown in 15m Class by their designers and manufacturers, brothers Uys and Attie Jonker of Jonker Sailplanes. The JS3 had its maiden flight on 12 December 2016. They told me that by the time they had packed the two new JS3s into boxes they had flown about 50 hours in them, combined.

Until the JS3s had actually been loaded onto the Quantas aircraft, it was not official that the gliders would be flying at Benalla. Uys said, “We decided about a year and a half ago that we would participate in 15m Class, as we had completed the aerodynamic design of the JS3. We were hoping to have it completed in time for Benalla, but we knew from the beginning that we would need an additional six weeks to get them here.” So, ensuring the participation of the newest gliders in the contest was a tightly timed achievement.
Due to Christmas and New Year holidays, the Jonkers decided to apply for the gliders to be registered in Australia and hurriedly filled in the forms for an Aussie C of A. When Lisa and I caught up with Uys at the beginning of January he was still filling in the new maintenance release for his glider.
The main innovation in the JS3 is the position of the wings. “The precise positioning required extensive modulation and numerous simulations to understand the complex flows between the wing and the fuselage,” said Uys. 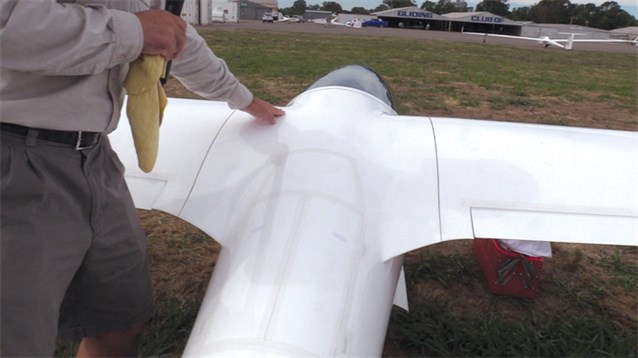 He explained that the high wing design observed in birds has always been recognised as an advantage – theoretically, at least. Nevertheless, despite many attempts in the past, a successful design of this type has never before been achieved. “It took us a lot of iterations, slowly moving the wing up and down in computer models to determine the effect on the sailplane and find the optimum position.
“What we do see [in the design] is that we have a larger wing available for lift. The wing area is the same, but a lot more of this area is doing the work.
“We got the first indications that we were correct when we saw that even with a wing loading of 60 kg/m2, you can climb nicely at 100 to 110 kph, which is slower than our 18m aircraft at 54 kg/m2 wing loading. So we see there is something special about this design, and we hope that by comparing it to other aircraft over the next few days, we can determine how much gain we have actually realised. 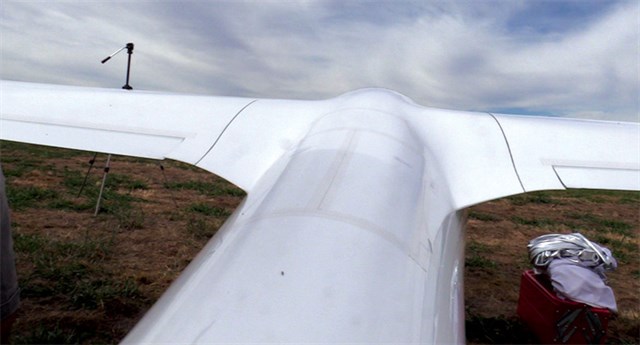 “If you look at the fuselage wing junction [see photo right] you can see that we tried to find the correct angles. It looks like a bird, and the advantage is that you have additional lift, which is lost if you move it to a lower position. According to our modulations, the disturbance from the wings affects the fuselage less, and therefore the fuselage runs cleaner through the sky.”
Lisa asked Uys what he thought the JS3 would be known for in the years to come. He said, “We have always been trying to make an aircraft that is pleasing to the eye. We also want an aircraft that is good in all conditions, but with wing loading variations so it could also be a winner in weak European conditions. The idea was to make an all-conditions, winning aircraft.”
Other innovations in the glider include moving the energy tubes to the elevator, making the fin cleaner and reducing drag. 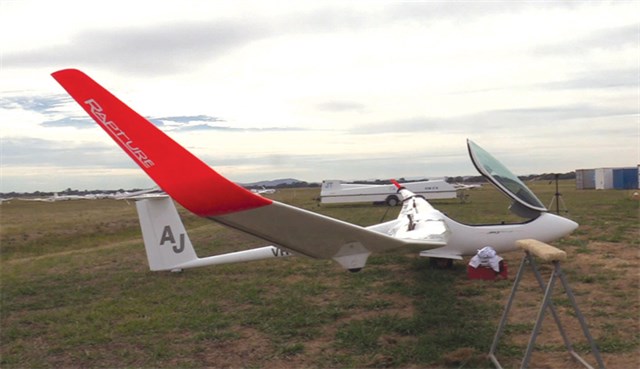 IN THE AIR
By the end of the competition, Uys had racked up two day wins and Attie a 2nd place, even though 15m Class only completed six races, as one was cancelled in the air due to the accident [see page 31]. Uys and Attie also finished the comp in places 11 and 12. So, it is clear that the glider is a capable of beating the Ventus 2, ASG29 and Diana 2.

You can see  the walk around the JS3 with Uys Jonker, plus Lisa’s interview with Uys in full and 120 other videos from WGC Benalla at the Video Gallery  wgc2017.com
or on  YouTube tinyurl.com/jk4orfa