Race to the finish line on last day of SGP Finals 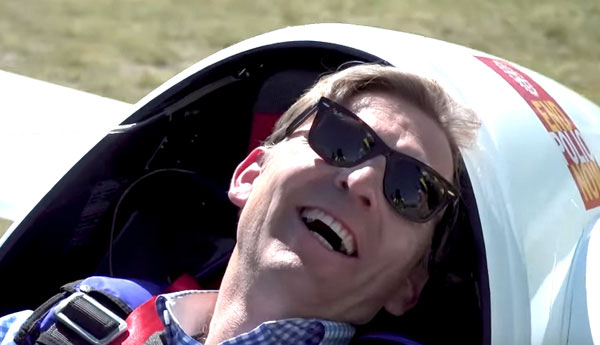 9th FAI Sailplane Grand Pxix World Champion Tilo Hiloghaus after landing on the final day of the competition. He sadi, 'I am exhausted but very happy.'

For the final race day at the 9th FAI World Sailplane Grand Prix Finals, the low pressure system had moved north and the wind had abated. The day promised to be mostly blue with thermals extending to above 3,000m. The wind came from the south west but not too strong, which would mean less ridge lift.

A cat's cradle 261km task was set going east, west, south, north then back west. The finish moved straight in from Mont Louis with no control point.

At the start, Sebastian Kawa led the way to the south side of La Cerdanya Valley, closely followed by Łukasz Wójcik. Mike Young and Louis Bouderlique took a northerly route on their own.

The rest of the field stuck together on the higher mountains to the south. By the time they were approaching the turnpoint they all came together and took a climb to 3,000m.

Giles Navas broke ahead of the field and won the final race day.

The main gaggle headed for the next turnpoint but once again, Louis took a different line followed by Giles Navas and Christoph Limpert.

They did not climb as they crossed, and Pete Temple and Sebastian pulled out in front. At this point in the race Tilo Holighaus was close to the back of the fleet and the gliders started to spread across the mountains, all looking for a good climb.

Jaume Prat commentated on the races with Brian Spreckley for the live broadcasts during the contest, bringing a depth of local soaring knowledge.

Moving on to Carabassa they still found no climb and all moved onto at the edge of the Andorra Valley. Tilo and Sebastian came together and followed the ridge line to Pic de L’Orri, maintaining altitude but still finding no climb. Low on the ridge at about 2,000m they did find a climb but Tilo left it for the lower slopes of the ridges.

Tilo Holighaus had for the second time lost contact with the main group but was able to find his way back with the leaders.

As the rest of the group followed, Sebastian took the climb back up and Tilo was now low, on his own and once more at the back of the fleet.

Most pilots climbed slowly on Pic de L’Orri but it was clear that conditions were difficult and possibly deteriorating.

Coming to the Boumort turnpoint, the ground rises to the highest point of the race. But all pilots were struggling to gain enough altitude to reach the 3km turning zone.

Eventually, Giles Navas found a good climb and Jon Gatfield followed the ridge into the turnpoint.

Leaving the turnpoint for the northern leg, they went back again to Pic de L’Orri. Giles took two climbs on the way and was now well in the lead.

Heading back south after the turnpoint, the main group, including Sebastian and Tilo, found a good climb crossing the Andorra Valley and they now nearly had final glide.

Giles was now very far ahead. For the rest it was a straight race into the final turnpoint and back to the finish. On the final stretch, Tilo inched past Louis, but then Sebastian pulled in front of Tilo in a very close finish.

However, Giles Navas had already won the day, taking the prized 11 points and denying Sebastian the chance to gain on Tilo.

The final scores left Tilo Holighaus way ahead on 49 points to win the championship. Defender Sebastian Kawa was penalised and lost points on the day, but this did not stop him from taking the 2nd place on the podium with 35 points. Louis Bouderlique took the 3rd podium place with 28 points, beating Didier Hauss into 4th position after he failed to win any points on the final day

At the closing ceremony, Brian Spreckley recounted how he had first visited the airfield at La Cerdanya in 1988. It was then a nearly abandoned old airfield with no gliders, few power planes and no facilities. After that, the European Soaring Club visited La Cerdaya for many years and introduced many pilots to the region.

He said, ‘What is really satisfying for me is that after 30 years, we are running the World Sailplane Grand Prix Final here in La Cerdanya.’

Brian thanked all the competitors, the SGP team and all the members of the La Cerdanya club for what was an exciting and successful SGP Finals.

Highlights of all the races and  more at  sgp.aero